Happy Valentine's Day! Unfortunately I won't see my Valentine until well after 7pm today which is why we celebrated this weekend.  Oh well, he'll at least be on my mind.  On a brighter note, I think winter is trying to make a presence with a rainy day here or there and it's about time!  As long as there isn't much wind I'm fine with the rain.  I'm also looking forward to a short week and a long weekend.  The kids have this Friday and next Monday off which means I do too ;0)  I like the sound of that.  Things in my world need to slow down a bit so I can catch up and hopefully a 4-day weekend will do the trick.
Now for last week's pictures: 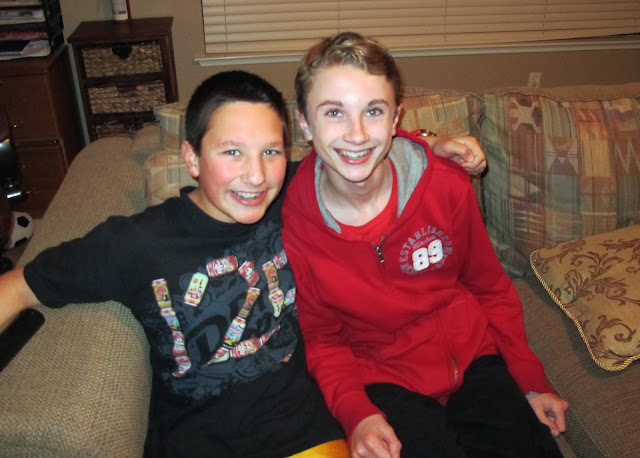 ﻿
Day 36- Sunday, 2/5/12
It's Super Bowl Sunday and we spent the day at Raul and Wendy's not just for the game but also to help their son, Marcus, celebrate his 13th birthday.  I had to take a picture of Tyler and Marcus together.  They have known each other since the day Marcus was born, and I have a lot of pictures of the two together when they were younger but not really now that they are teenagers.  How did that happen so quick? 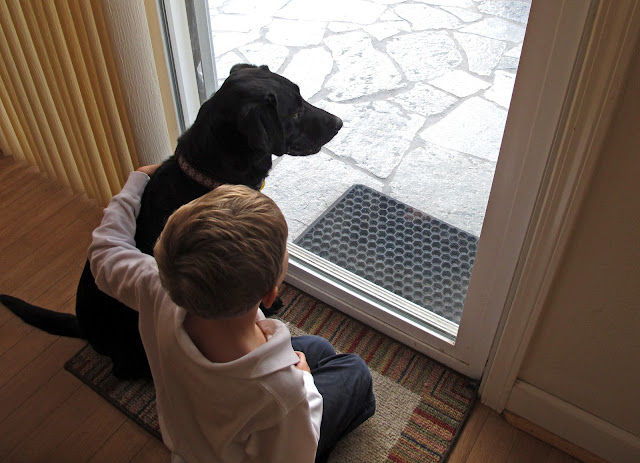 Day 37- Monday, 2/6/12
Today was a rough day for Brandon.  He got in a lot of trouble at school so he was quietly sitting by the slider sulking when Bella decided to join him for support.  She does not like it when one of her boys gets in trouble as I'm sure she can relate.  It's good they have her to lean on though.  They know she does not judge and will always be there for them. 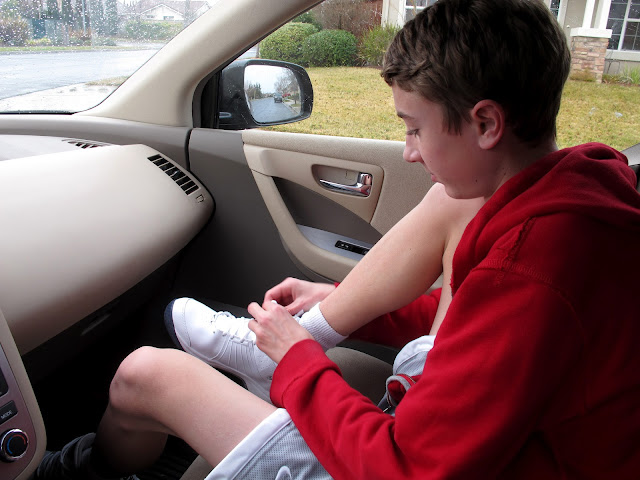 Day 38- Tuesday, 2/7/12
Here is a typical scene--rushing off somewhere while kids put their shoes on in the car.  Ugh!  Today was Tyler's last day of basketball tryouts, and he's still getting used to how long it takes to lace up and tie those hightops.  Later he found out he made the team along with 2 of his close friends.  Should be a fun season! 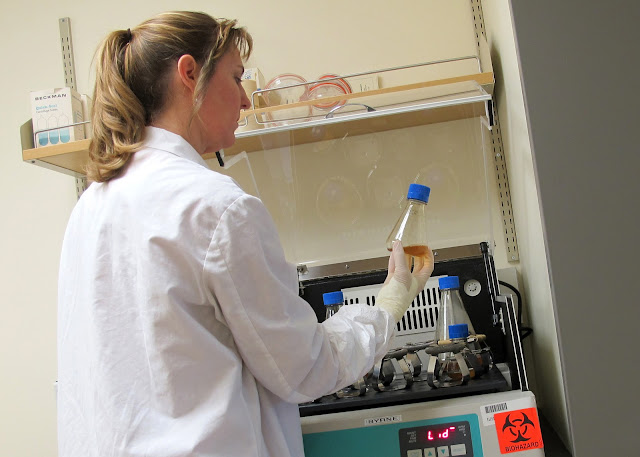 Day 39- Wednesday, 2/8/12
This week I've spent a great deal of time at work trying to get our insect cells growing in suspension which is a new technique for me.  They are tricky buggers and have given me a lot of trouble, but after a great deal of trial and error, I think I finally have them under control and happily growing. 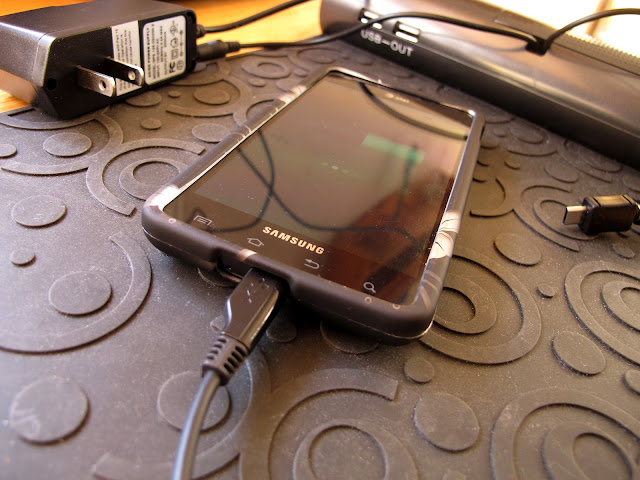 Day 40- Thursday, 2/9/12
I used to laugh at my kids when they would panic because their game systems turned red and they'd have to rush to recharge.  Well now I'm a slave to the recharge with my smart phone and have learned the hard way in this past week that my phone's battery does not like any other charger besides the one it came with.   A dead phone can be so crippling! 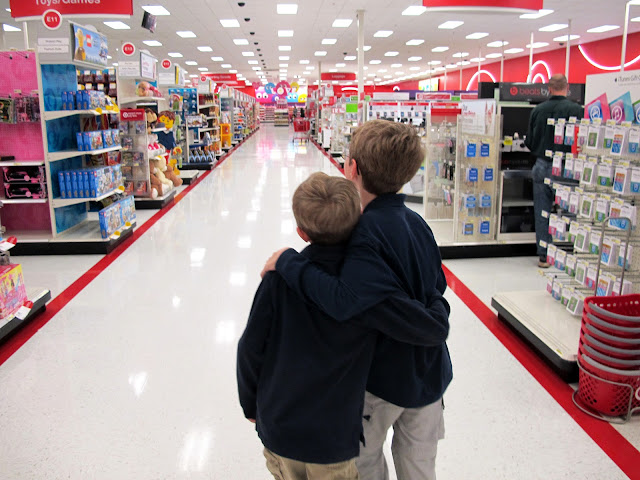 Day 41- Friday, 2/10/12
Awe--brotherly love.  Justin earned some gift cards by participating in a mind study at UC Davis and was eager to spend his money at Target.  Once we got there he told Brandon that he would also buy a little something for him which is what sparked the PDA.  It's so nice to see them hug and not slug which is usually the case with my boys.  Luckily I had my camera because I was going to take a picture of Justin selecting his reward but this made for a better family moment especially since its so rare! 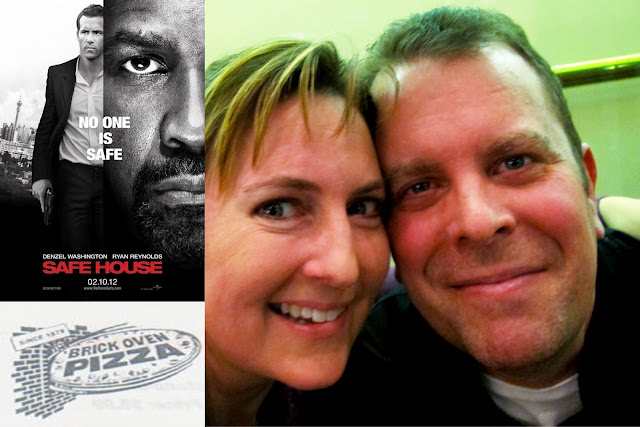 Day 42- Saturday, 2/11/12
Date night!  This isn't the best picture but it's cute.  John and I went out for dinner and a movie as an early Valentine's treat since celebrating on Tuesday is not going to happen with the kids in karate.  We had some good pizza and enjoyed an action packed movie while Tyler babysat his brothers.  They got to watch Real Steel at home and also enjoyed themselves so it was a win-win.


That wraps up this week.  See you next Tuesday. 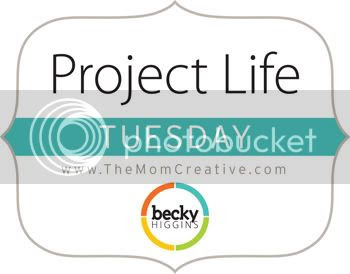